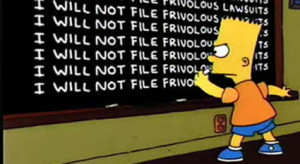 As of May 1, 2014, Filichia Insurance has filed a civil action and complaint against us in the Circuit Court of the 18th Judicial Circuit in and for Brevard County, Florida, alleging:

We deny all of Filichia’s allegations and will vigorously defend our Constitutional right to free and open speech.

This type of lawsuit, known as a SLAPP (stands for “strategic lawsuit against public participation”), is a malicious and frivolous legal maneuver, the purpose of which is to quash free speech.  While such a suit may bluster endlessly about libel and damage to business and reputation, it is first and foremost a tool used by companies with major customer service problems, who would rather sue those who criticize them than address the problems.

SLAPPs are intended to have a chilling effect on people’ rights to self expression and opinion.  Everyone’s free speech is a fundamental right in America.  Defense of that speech must be taken seriously, and pursued with as much ardor as the defense of our other freedoms and liberties.

If free speech is important to you, consider learning more about protecting your rights to share reviews, ratings, comments, complaints, criticisms, opinions, and ideas, whether positive or negative, by visiting these websites (disclaimer: we are not affiliated in any way with these websites or their organizations.  We receive no compensation, their listing below is not an endorsement, and is provided for reader reference and information purposes only):

The authors of this website, having been unsuccessful in their efforts to settle the lawsuit without court action, have hired Marc J. Randazza to represent them.  Mr. Randazza is the managing partner of the Randazza Legal Group, and splits his time between the Las Vegas and Miami offices. He is a nationally-known First Amendment and intellectual property attorney, and handles litigation and transactional matters nationwide.

As Randazza’s and Warrington’s clients, we believe strongly in Americans’ right to speak freely, openly, and honestly about any and all matters, however delicate or unpopular.  That is why we have sought the absolute best representation to handle our lawsuit defense against Filichia Insurance Agency.  We feel Filichia has filed a frivolous lawsuit against us.

If anyone’s ability to speak out can be stopped simply because it is difficult, stressful, or costly to stand up for that basic right, we all lose, big time.  We hope the reader understands and accepts this “inconvenient truth”, and if a similar situation arises, acts to protect his or her own rights.

Our case is now certified to be heard in the Brevard County court.

Given that the plaintiff has stated that our speech has caused/is causing immediate and irreparable injury, and they also have demanded that our speech be removed and permanently enjoined, it is our belief that our next step may be to defend ourselves against a plaintiff motion seeking a temporary injunction against our website and forum postings.  Our speech is “all we have”, so this would be an important defense.

Would you be willing to wear a muzzle every minute of every day, for the rest of your lives?  To live in fear of offending someone richer and more powerful than you?   We say “no”, and by vigorously defending this lawsuit, we will contribute, in our small way, to preserving this dwindling , possibly endangered, American freedom.

The following article provides a good discussion of the topic of libel, slander, and defamation.  Thanks and credit to the source of this information, the ExpertLaw.com website.

What Are Defamation, Libel and Slander?

Generally speaking, defamation is the issuance of a false statement about another person, which causes that person to suffer harm. Slander involves the making of defamatory statements by a transitory (non-fixed) representation, usually an oral (spoken) representation. Libel involves the making of defamatory statements in a printed or fixed medium, such as a magazine or newspaper.

Typically, the elements of a cause of action for defamation include:

Damages are typically to the reputation of the plaintiff, but depending upon the laws of the jurisdiction it may be enough to establish mental anguish.

Most jurisdictions also recognize “per se” defamation, where the allegations are presumed to cause damage to the plaintiff. Typically, the following may consititute defamation per se:

While actions for defamation have their roots in common law, most jurisdictions have now enacted statutes which modify the common law. They may change the elements of the cause of action, limit when an action may be filed, or modify the defenses to an action for defamation. Some may even require that the defendant be given an opportunity to apologize before the plaintiff can seek non-economic damages.

What Defenses Are Available To People Accused of Defamation?

Another defense to defamation actions is “privilege”. For example, statements made by witnesses in court, arguments made in court by lawyers, statements by legislators on the floor of the legislature, or by judges while sitting on the bench, are ordinarily privileged, and cannot support a cause of action for defamation, no matter how false or outrageous.

A defense recognized in most jurisdictions is “opinion”. If the person makes a statement of opinion as opposed to fact, the statement may not support a cause of action for defamation. Whether a statement is viewed as an expression of fact or opinion can depend upon context – that is, whether or not the person making the statement would be perceived by the community as being in a position to know whether or not it is true. If your employer calls you a pathological liar, it is far less likely to be regarded as opinion than if such a statement is made by somebody you just met. Some jurisdictions have eliminated the distinction between fact and opinion, and instead hold that any statement that suggests a factual basis can support a cause of action for defamation.

A defense similar to opinion is “fair comment on a matter of public interest”. If the mayor of a town is involved in a corruption scandal, expressing the opinion that you believe the allegations are true is not likely to support a cause of action for defamation.

A defendant may also attempt to illustrate that the plaintiff had a poor reputation in the community, in order to diminish any claim for damages resulting from the defamatory statements.

A defendant who transmitted a message without awareness of its content may raise the defense of “innocent dissemination”. For example, the post office is not liable for delivering a letter which has defamatory content, as it is not aware of the contents of the letter.

An uncommon defense is that the plaintiff consented to the dissemination of the statement.

Under the First Amendment of the United States Constitution, as set forth by the U.S. Supreme Court in the 1964 Case, New York Times v Sullivan, where a public figure attempts to bring an action for defamation, the public figure must prove an additional element: That the statement was made with “actual malice”. In translation, that means that the person making the statement knew the statement to be false, or issued the statement with reckless disregard as to its truth. For example, Ariel Sharon sued Time Magazine over allegations of his conduct relating to the massacres at the Sabra and Shatila refugee camps. Although the jury concluded that the Time story included false allegations, they found that Time had not acted with “actual malice” and did not award any damages.

The concept of the “public figure” is broader than celebrities and politicians. A person can become an “involuntary public figure” as the result of publicity, even though that person did not want or invite the public attention. For example, people accused of high profile crimes may be unable to pursue actions for defamation even after their innocence is established, on the basis that the notoriety associated with the case and the accusations against them turned them into involuntary public figures.

A person can also become a “limited public figure” by engaging in actions which generate publicity within a narrow area of interest. For example, a woman named Terry Rakolta was offended by the Fox Television show, Married With Children, and wrote letters to the show’s advertisers to try to get them to stop their support for the show. As a result of her actions, Ms. Rakolta became the target of jokes in a wide variety of settings. As these jokes remained within the confines of her public conduct, typically making fun of her as being prudish or censorious, they were protected by Ms. Rakolta’s status as a “limited public figure”.

Why Commencing A Defamation Action Is Not Always A Good Idea

While people who are targeted by lies may well be angry enough to file a lawsuit, there are some very good reasons why actions for defamation may not be a good idea.

In other words, the plaintiff in a defamation action may be required to expend a considerable amount of money to bring the action, may experience significant negative publicity which repeats the false accusations, and if unsuccessful in the litigation may cement into the public consciousness the belief that the defamatory accusations were true. While many plaintiffs will be able to successfully prosecute defamation actions, the possible downside should be considered when deciding whether or not such litigation should be attempted.

Would you have ever imagined?  You get sued by your insurance agent, and that prevents you from getting insurance?  Well, that just happened to us.

Here is the progression, the end result of which is, we are now unable to purchase liability insurance:

But this is not the end of this story…  We suffer through all this grief and stress with Filichia Insurance of Titusville, and we still need liability insurance for our rental properties.

The irony?  All along, we have been trying to buy some form of liability coverage for our rentals, the general category of which includes umbrella policies.  We gave Filichia a shot at our business, they fucked up, and now they want to lay the blame for their misdeeds on us.  And, as a result of their outrageous legal action against us, we are barred from getting the liability insurance that we so desperately need.

Filichia Insurance’s actions against us have placed us at great risk of a catastrophic lawsuit, from which we have no insurance protections.  The fact that we are vulnerable — the blame and fault for which we assign completely to Filichia Insurance — we consider to be potentially actionable.  They will be liable to us, if we end up destroyed by such a lawsuit, the cause of which will entirely be their frivolous and baseless lawsuit against us.

Nice place to be, huh?  Wish you were us?

Further news on the insurance front.  As discussed above, we do most of our insurance business with Viera Insurance.  We recently contacted Viera to obtain a homeowner’s/landlord’s policy for a Titusville condo.

We received the following email communication from Viera:

Unfortunately, due to the pending lawsuit, I do not have any companies that I can write your rental homes with at this time. You may want to check with Citizens Insurance as they may be able to assist you. Please let me know if you have any questions.

After receiving this email, I called Erin for further information.  As a result, I learned:

So, once again, Filichia’s thoughtless and malicious lawsuit against us has put us at grave risk.

This situation cannot be left unaddressed.  We intend to respond.  Remember what Mom told you: Actions have consequences.